Our Eye care professionals in Athens, OH specialize in understanding how the human eye really works, as well as diseases and conditions that affect your vision - many of which do not have obvious symptoms. Eye doctors know how age and risk factors affect vision over time for young and old, and they understand the benefits and features of corrective lenses including eyeglasses and contacts.

Our optometrists take the time to explain the results of your eye exam, describe your options and listen to your eye care needs. Because maintaining good eye health is an ongoing partnership, we encourage you to ask questions and share your health information, which could be vital to monitoring, diagnosing and treating potential vision problems. 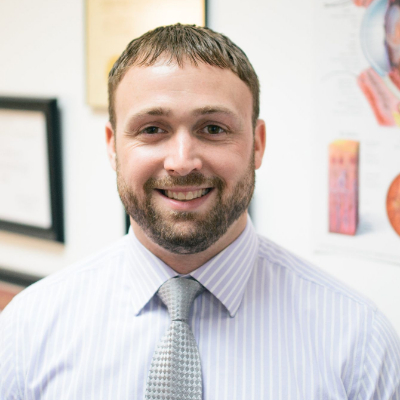 Dr. Terry is a National Board Certified optometrist who graduated from IAUPR School of Optometry in 2010. He is a member of the American Optometric Association, as well as the Ohio Optometric Association.While in optometry school, Dr. Terry completed an externship in McLean, Virginia at See Clearly Vision. During this time, he was able to observe numerous eye surgeries including cataract extraction, LASIK, and corneal transplants.

Dr. Terry has been working alongside his father, Dr. Robert Terry, at their private practice in Gallipolis, Ohio since 2010.He joined our office at Walmart Vision Center part-time towards the end of 2013. He currently lives in Athens, Ohio. During his free time, Dr. Terry enjoys working out, golfing, outdoor activities, traveling and watching sporting events.